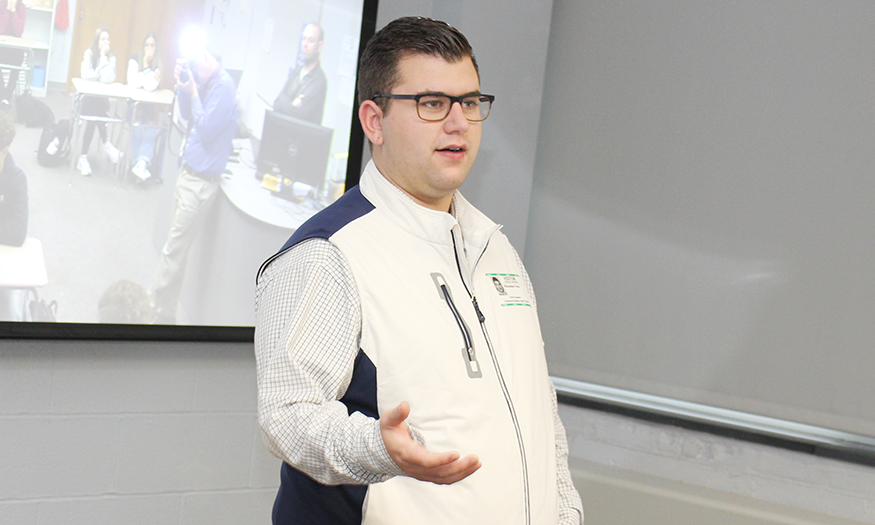 Mr. Feuz shared his passion for sports broadcasting that began with a podcast he created while in Middle School and has led him to filling in for Roger Wyland on his Big Board Sports radio show this week.

Mr. Feuz recalled his first interview for his podcast was Nick Gallo, then a star quarterback for Schalmont. He joked that for him, as a freshman at the time, it felt like he was interviewing someone like Tom Brady.

As he grew to interview other athletes from Schalmont and other schools, Mr. Feuz said developing relationships was key to his success.

“It takes time to build relationships. It’s kind of like planting a tree. It’s not always about asking for something but building a relationship like you would with a friend,” Mr. Feuz told students.

Mr. Feuz explained his goal is to be a play-by-play baseball announcer and has already found some success with summer and minor league teams.

Teacher Mr. Couture told his class that Mr. Feuz’s advice about building relationships is very important but he also credited Mr. Feuz’s passion that was evident when he was a Schalmont student.

“You also have to have a passion,” said Mr. Couture. “He’s taken his drive and passion and really ran with it.”

Thanks for visiting with our students!